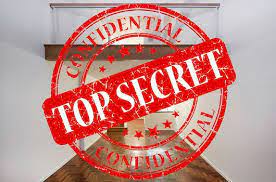 Buying and selling ‘off-market’ as it’s termed has traditionally been a strategy in prime parts of the country, predominantly in central London where privacy and pricing concerns are the primary motivation for most secret sellers.  But this is changing.

Of the 18 deals we have agreed in the first half of the year 6 weren’t on websites or in estate agents windows. Off-market sales have been talked about a lot already this year.

During the first five months of the year a record 23% of London homes changed hands without being openly marketed according to Hamptons who look at all the deals done by Countrywide estate agents, a rise from 20% in 2021.  However, today, a higher proportion of homes are now sold discreetly in prime country markets (24%) than in London – 59% of off-market sales are now outside the capital.  With 10% of homes sold off-market nationally, the absolute numbers are running above 2015 levels.

Hamptons think that this extension into both country and non-prime markets has primarily been driven by a lack of stock and a seller’s ability to secure a higher price in a competitive market, rather than privacy concerns. I’m not so sure.

In the five years running up to the start of the pandemic, the average home sold off-market achieved £1.2m.  However, the growth in off-market transactions has increasingly been driven by lower-priced properties.  So far this year, the average discreetly marketed home changed hands for £858,000, down from £979,000 in 2021. Nationally, around one in ten homes sold this year found a buyer without being publicly marketed, the highest level since 2015. Many of our clients value our ability to get to these invisible listings which account for about 30% of the properties we buy.

So far this year, homes marketed discreetly have achieved a higher proportion of their asking price than their counterparts which were more widely marketed according to Hamptons.  The average off-market home sold in 2022 achieved 99.5% of its asking price, surpassing the 2014 record of 98.0% which was set in a strong prime central London market.  Meanwhile, similar homes marketed to a wider audience have achieved an average 99.1% of their initial asking price so far this year, also a record.

These record prices are being achieved on the back of increasingly shorter marketing periods.  The average home sold away from the glare of the open market took an average of 42 days to find a buyer, compared to 65 days for a similar prime home that didn’t start life off-market.  Meanwhile, the average time to sell across the whole of the market in May stood at 26 days, up from 24 days in May 2021.  The longer time taken to sell an off-market home reflects the increased length of time it takes to find buyers purchasing in the prime market.

Typically, homes spend two to four weeks being quietly marketed, before either a buyer is found or it is launched on the open market to reach a wider audience.  With more off-market properties securing a sale quickly, fewer homes are then being advertised more widely later down the road.  Just over a quarter (26%) of homes marketed discreetly came onto the open market this year, down from 38% pre-pandemic in 2019.

We are not magicians, we can’t just magic up properties and just like the open market where stock is 30-40% lower than usual the pool of off-market homes is smaller than it would usually be. We can get to properties faster and more easily than the public but this is only one of the reasons that you might decide to retain the services of a buying agent. If you’re in any doubt then get in touch.