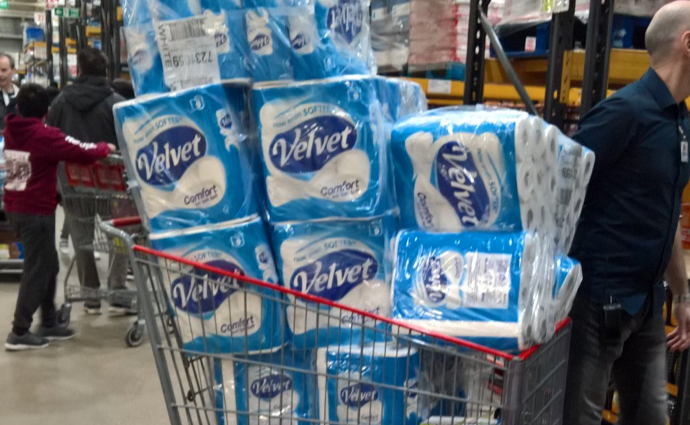 If you’re struggling to find a home don’t panic. Rightmove calculates that they are showing 20% fewer properties. More will come once the vaccine gives older owners confidence to allow strangers around their homes. Many of those who would have sold in Q1 this year will join the usual supply we’d expect in Q2 resulting, I think, in a glut of new listings in the Spring. In an article in The Sunday Times, across the country, except in London, there is less than two and a half months’ worth of homes left to buy at current rates of sale. In 530 postcode districts, which is almost a fifth of the UK, there is less than two months left, according to TwentyCi

It seems to me that as a result of the shortage some people are panic buying properties just as they did Andrex last year. If you add in the off-market properties I think that the supply of available homes for sale is down about 30% leading some buyers to compromise unnecessarily and often to over-bid to secure one. It’s like Christmas Eve, people are buying the last turkey in the shop for fear that there will be no Christmas lunch the next day. They are buying a bird that has been prodded and poked and passed over by everyone else.

This week I’ve offered on two homes that didn’t sell last year both having reduced their guide prices in frustration. One at £2.5m, one at £700k. To secure them now my clients had to offer 10% more than they could have bought either of them before Xmas as competition for fewer homes drives prices back up.

Not all deals are holding though. In normal times about 30% of agreed deals fall through. Today as the conveyancing system creaks under the strain there a more buyers and sellers losing patience and pulling out.

Most people who had to move home have done so. Potential sellers today, typically older & more Covid conscious, don’t want strangers in their homes if there’s a real chance, however small, of actually dying. These people are waiting for vaccination but will then put their properties on the market.

We need to wait until we can see just what impact the vaccine is having. If people wear it like a suit of armour then we can expect a flood of new listings. If people are bold enough to go out again to restaurants or to the cinema or to get into an aluminium tube with 300 strangers for two hours while they fly off to the sun then I think we can expect a surge in business. If you add on the Governments determination to keep pumping prices with new Help to Buy schemes or by extending the Stamp Duty holiday then it’s going to be a great year for estate agents as the market takes off.

According to the estate agency trade body Propertymark⁩ in January the average estate agency had 487 buyers registered, a 40 per cent rise from 348 in December and a 27% increase from 382 in January 2020. Each office had 38 homes for sale compared to 33 in December and agreed deals on 10, up from eight the month before. 9% sold for more than the asking price. 62% sold for less.

So, don’t panic. Prepare yourself so that you can move fast when you do find the right thing but don’t be rushed and if in doubt, call a buying agent to help steady your nerves. There are plenty who can help.