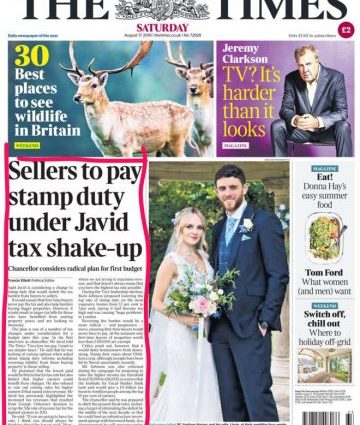 In what might be just a mis-speak the Chancellor Sajid Javid is said to have suggested in the Times that “he was looking at various options when asked about stamp duty reforms including reversing liability from those buying property to those selling.” Personally, I doubt that he is – it’s The Silly Season but these days, who knows. Maybe it’s just something to distract us from Brexit?

No commitment in the piece but of course this would have huge implications if true. While we all try and work out exactly what buyers and sellers will sit on their hands and wait meaning that the September market will be very tough. Twitter was full of reaction, many within the industry have called for such a change but a lot of people suggested that all that would happen is that prices would rise. I went to New Broadcasting house to talk to Lukwesa Burak.

What’s odd about the proposal and hard to understand about those who support this plan is that first time buyers are already exempt from Stamp Duty up to £300k and pay a reduced amount on the next £200k. Are those who sell to first time buyers going to be given an exemption or will they stick the perceived saving on the price thus driving up house prices for those arguably struggling with affordability the most?

Also, people who argue that Stamp Duty is stopping people in bid family houses from downsizing aren’t going to save anything. In fact, they will pay tax on the more expensive home that they are selling rather than the presumably cheaper home they are moving to. The idea of encouraging older people to free up their under-occupied homes for the next generation to move into doesn’t seem to be helped by this proposal.

Lots of complaints from people saying that the change would be painful for investors, landlords and second home owners but they forget that SDLT is something that HMRC allows you to set against Capital Gains Tax when you come to sell along with other buying and selling costs (including you buying agents very reasonable fees!)

If you wanted to do some real Blue Sky Thinking them why not scrap Stamp Duty entirely and remove the exemption that currently exists for Capital Gains Tax that people get on their Principal Private Residence? It’s the second biggest tax break (after zero rated VAT on food and clothing) at £28bn a year. Ok, so you’d need to tweet it so that people planning to use their equity to pay for their retirement but the system already works for owners of second homes, landlords and investors. It would only be paid by people who made un-earned profit on their home and they would keep the bulk of it.

Then the next morning, this…

2019-08-17
Previous Post: Record week!
Next Post: Persimmon half year results.
Corona Clinic - Free 30 minute chat via Skype/FaceTime/Zoom or phone for anyone thinking of buying or selling, letting or renting during the Pandemic. See 'services' for more details or send an email to book a time. 😷