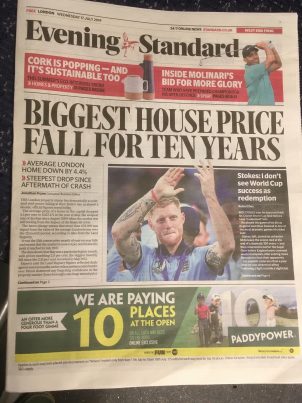 How have house prices done since 2008 once you factor in inflation? Answer, they have actually 𝐟𝐚𝐥𝐥𝐞𝐧 by 6% across the UK whilst in London they have risen but ‘only’ by 17%.

Latest numbers from the Office for National Statistics shows that house prices last month for the UK were up 0.1% on April at 229,431. The lowest annual growth was in London, where prices fell by 4.4% over the year to May 2019, down from a fall of 1.7% in April 2019 and the lowest annual rate in London since August 2009 when it was negative 7.%. House price growth in Wales increased by 3.0% in the year to May. Prices in Scotland increased by 2.8% & the average house price in England increased by 1.0%. Northern Ireland remains the cheapest UK country to purchase a property in, with the average house price at £135,000.

Transaction volumes have fallen over the past year except in Scotland with sales across the UK 14% below the long-term monthly average. 𝑀𝑒𝑎𝑛𝑤ℎ𝑖𝑙𝑒 𝑖𝑛 𝐿𝑜𝑛𝑑𝑜𝑛, 𝑠𝑎𝑙𝑒𝑠 𝑎𝑟𝑒 42% 𝑏𝑒𝑙𝑜𝑤 𝑎𝑣𝑒𝑟𝑎𝑔𝑒. Using ONS/Land Registry data we see that usually 𝟏𝟎,𝟑𝟎𝟎 properties sell every month. In July 2002 18,000 sold. In Feb 2009 just 3,251. The initial count for last month (March) showed just 𝟓,𝟗𝟒𝟕 changed hands.

There is a market, you can buy and sell but selling is certainly harder than buying. As a buying agent I’ve never been busier but only 40% of sellers understand that the market has changed and that so long as they are buying and selling then the only thing that really matters is the gap between what they sell for and what they have to pay for the next one.

2019-07-18
Previous Post: Should we wait?
Next Post: Lights, camera, action!
Corona Clinic - Free 30 minute chat via Skype/FaceTime/Zoom or phone for anyone thinking of buying or selling, letting or renting during the Pandemic. See 'services' for more details or send an email to book a time. 😷