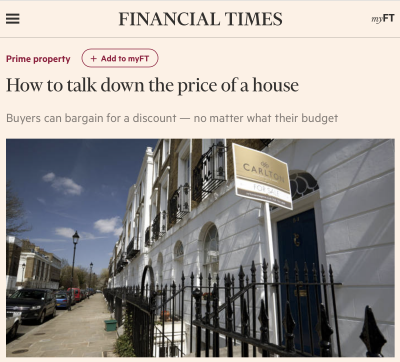 How to talk down the price

Hugo Cox has written a piece in the Financial Times about the best ways to negotiate a deal when buying a house including suggestions from me and Property Vision.

Buyers can bargain for a discount — no matter what their budget

Securing big discounts on property is not only for the super-rich looking to swoop on a troubled market. Although the sale of mega mansions is not directly comparable to normal housing transactions — the super-prime market is like the fine art market, fuelled more by hype than fundamentals, says Henry Pryor, a London-based buying agent — many of the same principles still apply.

“I have never come across a period where there has been a greater spread between initial prices, final asking prices and the prices that are paid,” says Roarie Scarisbrick of Property Vision, a central London buying agent.

For anyone looking to buy a home, the FT has asked buying agents for tips on how to talk down a sale price.

Be prepared. If you are able to show you can deliver the cash quickly, there is more chance of your offer being accepted. The biggest mistake buyers make is waiting until they have found their dream home to prepare their finances, says Scarisbrick. “Before you start your search, you must have appointed a lawyer, taken the tax advice, established how you will buy it, where the money will come from, who will provide the mortgage and how long it will take — meaning a blunt conversation with your bank or mortgage adviser,” he says.

Research the seller. On a visit, the devil is in the detail. After he has glanced in the hallway for red-top bills (a handy hint of straightened financial circumstances), Pryor goes straight for the master bedroom. “Open the cupboards: are his clothes still hanging there, are there two toothbrushes in the bathroom?”

Keep your ear to the ground The best source of sale leads, however, is the parents network, says Scarisbrick. If you are lucky enough to have a child at a local school — or know someone who does — leverage that. “There is no better place to gather the information you need than at the school gates,” he says.

“For every house on the market, there will be two agents who tried to get the business and failed,” he says. Whether from sour grapes or in good faith they could provide a vital insight: perhaps their offer was spurned because they priced the house too low (suggesting the current asking price is inflated).

What’s missing? The biggest bargains at London’s top end can be found on homes that are in a great location but which are missing something, says Guy Harrington, who runs a £100m fund lending to developers and high net-worth buyers. A Mayfair house without a garden, he says, or a third-floor Kensington flat without a lift. Harrington has just secured for himself a walk-up third-floor flat in Kensington at a discount of 25 per cent.

Interrogate previous offers If the agent says a previous offer was rejected, check how firm it was: was it in cash, was the finance in place; did the buyer have another home to sell first? Know which price information to ignore, too. “When an agent starts talking to you about price per square foot, you know you have him on the run,” says Pryor. These metrics are likely to be months out of date. Besides, how do you price the view from the kitchen window, or the fact that the home is close to your in-laws? “There are no absolute values: everyone is selling for a reason.”

“I have seen more repossessions of super-prime homes in central London in the last year than in the 10 years prior,” says Roarie Scarisbrick of Property Vision, a buying agent focused on prime central London.

Smaller, niche developers have been hit hardest, says Henry Pryor, another buying agent based in London. “A lot of the funders of these developments are offloading their positions, turning the screw on developers,” he adds. “The hedge funders who thought that property was a doddle are getting out.”

“It’s worse for the single house developers, especially those who bought sites in 2013 and 2014 at the high point in the market,” says Scarisbrick.