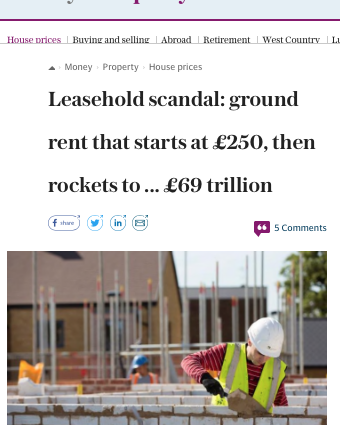 After much hard work and pressure from the likes of Sebastian o’Kelly and others the scandal of leasehold houses and the abuse of the system has caught the public attention. Speeches by Peter Bottomley in the House of Commons and newspaper articles have all shown the worst excesses and there have been a lot of case studies that have come forward to highlight the issue. The Government has announced plans to consult on a possible ban in future of houses being sold on a leasehold basis although it isn’t clear what might happen to the tens of thousands who already own leasehold properties.

There was a summary of the practice of selling houses on a leasehold basis on the BBC earlier this year.

Most of those who have issues seem to have been let down by their conveyancers. Many were offered advisors by the developers who were selling the properties in the first place which should have set alarm bells ringing but it remains to be seen just how many end up being sued for the mess they seem to have contributed to.

I suspect that whilst clearly culpable the house builders crime was to have been greedy. No one forced people to buy these properties in this way, most seemed to think how much they wanted a home and were naive at best and without anyone to look out for them they made some crushing mistakes.

One lady, Louise O’Riordan, was bold enough to take her story to the BBC and featured on Victoria Live program where she explained what happened to her. Louise and many others like her should have been able to rely on their conveyancers to explain what they were getting into and it is the conveyancers who I think they should have a debate with. [Of course I would also expect that had they taken up either my Quick Check or Pocket Agent services that these would have brought the shortcomings of leasehold tenure to their attention – as I did when speaking to other clients.].

Some will suggest that Louise was naive at best. On unforgiving social media others have gone further but she herself admits that she didn’t know what she was doing. She should have been able to rely on her advisors and I think it is they who have a case to answer.

Louise appeared on Roberto Perrone’s show on BBC Three Counties on 25th July in a two-part piece on the Leasehold Scandal. I spoke to Rob subsequently and I hope you will find the links below informative. As always, the Three Counties team put together a very balanced and helpful piece, I think.

All of this shows that buying a property is a serious business. It’s one that should not be taken in hand lightly or rushed. One might hope that the days when any fool could buy or sell a house were over but they aren’t. Too many people still think that they can do it themselves or will try to cut corners and get it done for next to nothing. As the saying goes, “if you pay peanuts, you get monkeys”. If you don’t want to be like Louise and the others and risk blaming yourself for being ignorant then please, get some advice.

S Nagpal: I sought Henry's assistance for a house purchase which was proving tricky on many counts. Henry is a...
Lucy: Amid the complexities of selling a property during covid, Henry provided exceptionally helpful and c...
Keely: Henry is a thoroughly decent and a very knowledgeable chap. He is what every potential property bu...
Cheryl & Rob: We had a great chat with Henry about our situation and the current housing market. As first time buy...
Mustafa: With the madness surrounding the property market currently, it's brilliant to be able to have a disp...
James & Gina: Relocating from Hong Kong to London during COVID was never going to be easy and we were on a mission...
Geoff: I would highly recommend taking the opportunity to speak with Henry. Candid, informed, genial and m...
Nicola: Henry was informative and direct when answering our questions. He was generous with his experience, ...
Akriti Nanda: My partner and I had the pleasure of speaking to Henry in one of his corona clinics. It was the most...
Neresse: Henry takes the emotion out of buying and brings to the table a more logical way of thinking. Extrem...
Ilya and Anna: Coming from another country we were confused about almost everything in UK property market. In short...
Giulia: We are first time buyers and we started looking into buying a property this Spring but we found the ...
K.Smith and A.O: As first time buyers, the process can feel daunting in normal circumstances, let alone in the curren...
Simon: We really appreciated Henry's time to discuss our house move plans. He gave us some very helpful ad...
R: Henry's pocket agent service is an absolutely stellar service. Henry saved me countless hours by tel...
Elena and Iljaas: Henry has been invaluable for us to buy our final home. Thanks to him all the emotions arising when ...
Carl: We were lucky enough to benefit from Henry's 'corona clinic' service. He provided us with valuable m...
Alice and Dave: Being a first-time buyer can feel rather like being a teenager again. The world of agents and mortga...
Steve Leslie: I've used Henry's Pocket Agent service to help me with both a flat that I've successfully sold and p...
Rich K: I dropped Henry a line recently whilst debating the best course of action regarding property purchas...