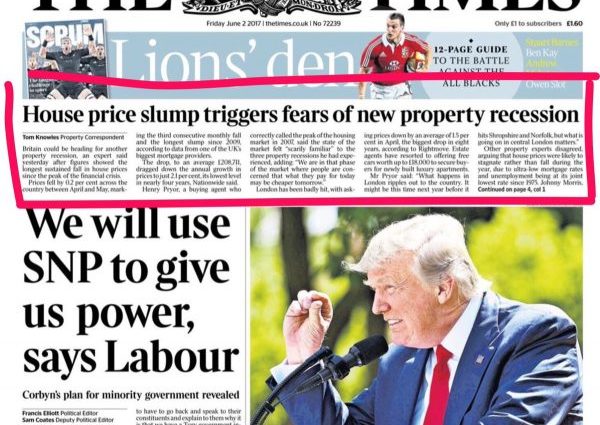 Writing in The Times yesterday Tom Knowles pondered the state of the housing market as we head into the Election next week. He was kind enough to include a comment from me as well as some reaction from the likes of Johnny Morris, head of research at Countrywide and Bricks & Mortar editor Anne Ashworth. As always, it’s never easy (or sensible) to generalise about the market across the country and the notion that there could be ‘an average property’ or an ‘average house price’ is something that irritates Kirstie Allsopp as much as me. 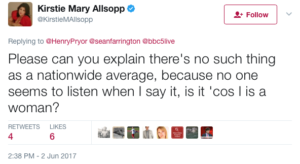 I was invited to chat to half a dozen radio programs including BBC Radio 5 Live on the back of it and feedback both to the shows and to the paper suggested that many areas outside the M25 are now beginning to feel the chill of a downturn.

Despite the challenges that the Election, Brexit and Mr Trumps antics the week ended on a high with three clients exchanging contracts on the properties that they wanted. Hard work from the three agents with whom we were dealing (Savills, Jordan Fishwick and Paul Wallace Commercial) helped overcome the ineptitude of the three sets of lawyers who were dealing with each case. All three were frankly hopeless and I will actively advise future clients to avoid them all.

So, three happy clients moving on and two new clients starting their searches and hoping that the current uncertainties give them a similar advantage.

Finally, I was hoping to exchange contracts on a fourth property in Chelsea Harbour. My clients lawyer at Silverman Sherliker had rushed everything and was ready in a week – that’s five working days from being instructed to being ready to exchange contracts! Sadly on the day of exchange the seller got cold feet and withdrew but for those conveyancing lawyers, agents and prospective clients who expect it to take three weeks or more I thoroughly recommend this firm. This is not the first time that they have delivered nor will it be the last time I recommend them.