Sales volumes are tumbling but is it Brexit, Stamp Duty or a lack of stock?

The latest house price indices have been published by both Rightmove and The Office for National Statistics this week. We have also had an update from HMRC on the number of homes sold in February. In summary;-

Average asking prices are up 2.3% over the last year.

Average sale prices are up 6.2% over the past year.

The number of homes sold last month (seasonally adjusted) was 104k which is about the same number that was sold in February last year.

For some reason the total number of sales recorded by HMRC is not the same as the number that is published by the ONS. Bigger brains than mine have looked into this in the past but perhaps the thing to concentrate on are the trends rather than absolute amounts.

As the following graphs illustrate, the number of homes selling across England (using Land Registry data) and in London shot up last March as buyers perhaps foolishly rushed to beat the introduction of the new 3% Higher Stamp Duty rate but fell compared to the same month in 2015 with no noticeable blip following the Referendum vote in June. Either the decision to leave Europe has not yet been felt in the housing market or it isn’t an issue. 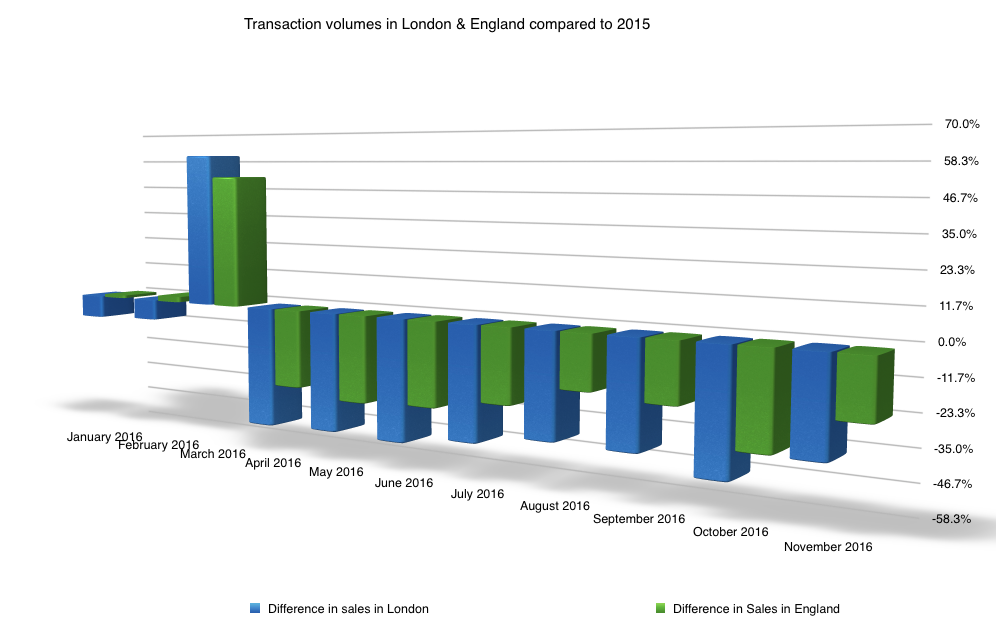 What does seem clear is that there are about 40% fewer homes being sold each month. The latest data from Land Registry is for November by the way.

Many people are blaming higher house prices on “a lack of homes for sale” but if you look at the total number of homes for sale and annual house price inflation there doesn’t actually seem to be a link, at least not one that I can define. As I have suggested before, house prices aren’t down to simple supply and demand but to the cost and availability of credit. Cheaper mortgages for more people drives up prices paid for the finite number of homes that are available be it 1.2m in 2007 (when annual house price inflation was 10%) or the 620k for sale today (when prices are rising at 6.2%pa).