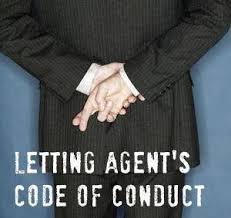 An article on the BBC News website following yesterdays You and Yours program on Radio 4 highlighted the continuing problems that consumers face with rogue letting agents. Despite the efforts of many including ARLA to get some sort of licensing or registration of letting agents and a change in the law requiring letting agents to sign up to a redress scheme as selling agents must we continue to hear stories of landlords and tenants being ripped off.

It makes me furious and I have written and spoken about the issue many times in the past. Whilst selling (and buying) agents are bound by the Estate Agents Act 1979 this law does not apply to those who let properties. We still seem to have the absurd situation that someone can be banned from being an estate agent can set up the next day in business as a letting agent.

In a rush of blood to the head this morning when reading this BBC article I dashed off a tweet bemoaning the work of the National Trading Standards Team at Powys County Council for their lack of visible progress in policing estate agents and stupidly attached a link to the BBC article. Of course, whilst they exist to police the 1979 Estate Agents Act the Trading Standards team do NOT have any role or jurisdiction over the murky world of lettings. I should have been more careful and on reflection I appologise the the Powys team for allowing people to think that perhaps I was suggesting that they could have or should have done something about a rogue letting agent. It’s not their brief.

Between them I calculate that sales and letting agents pay various bodies over £13m a year for the necessary licenses and permissions to trade – membership of one of the three Ombudsmen schemes, anti-money laundering registration, an annual fee to the Information Commissioner plus for some subscriptions to various trade bodies. The National Trading Standards Estate Agency Team itself I think cost £120,000 a year to run – paid from somebodies budget.

Despite all these hurdles there remain a stubborn and persistent number of rogue traders who continue to bring the hard work and standards that so many in both lettings and sales strive for into disrepute. Successive Governments have refused to step in and there is little sign of a national licensing or registration scheme on the horizon. Even now, if a sales of letting agent falls foul of the redress scheme they may have signed up to the Ombudsman can’t force them to pay the award made against them. It’s crackers!

It was unfair of me to pick on the Powys Trading Standards team or to suggest that they could or should have done something about a problem with a letting agent and I appologise for a poorly crafted tweet that may have allowed some to conclude that I did. I just wish that all those tasked with policing agents – be they in sales or lettings could point to a pile of rubbish that they have cleared up so that consumers and the good guys in the industry who bear the cost of all this could feel that something was being done for the millions that they are spending.

2017-03-07
Previous Post: A shortage of homes for sale
Next Post: Sales volumes are tumbling but is it Brexit, Stamp Duty or a lack of stock?
Corona Clinic - Free 30 minute chat via Skype/FaceTime/Zoom or phone for anyone thinking of buying or selling, letting or renting during the Pandemic. See 'services' for more details or send an email to book a time. 😷