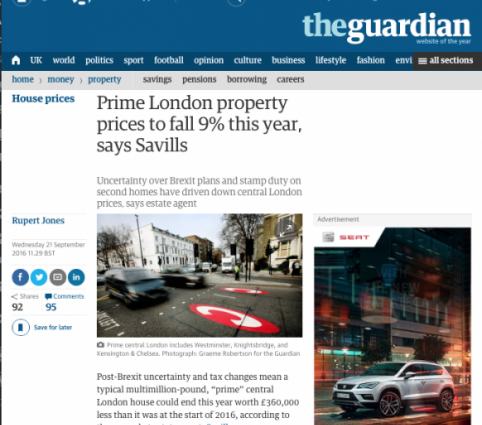 Back in 2007 I explained to the FT that after years of rising house prices I felt that the market had peaked. Professional colleagues like those at RICS dismissed the suggestion little knowing that we were about to live through the most frightening economic time in decades. If you’ve watch The Big Short you’ll have an idea of what part housing in America played in the Credit Crunch – in some parts of the world house prices would plummet. A decade later and some (like Ireland) are still 50% below their pre-crash levels.

In the UK prices in London have roared ahead whilst other parts have seen only modest gains. Fuelled by Quantitive Easing and cheap credit asset prices have ballooned but for some time I have been warning that once again we may have reached the next peak. I even took to the FT again to air my concerns back in 2014!

This week the boffins in Savills research department echoed my comments made earlier in the Spring and rightly garnered a lot of coverage as a result. 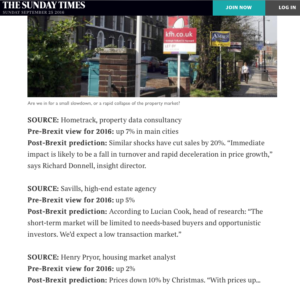 Just after the Referendum they weren’t quite so certain but more and more people are starting to recognise that the changes made to transaction costs and to some holding costs have decimated the upper end of the market and there are signs that it is infecting the lower levels too. The ‘Brexit’ vote has compounded the problems created by George Osborne unsettling many potential buyers and leaving many sellers unsure whether now is the right time to try and sell. Supply of available property is low and only half of what is available is actually selling.

Look at the surprisingly honest statistics published by an estate agency lobby group. According to @naea_uk in July the typical estate agency has 298 buyers registered (35% lower than in July last year), 38 homes for sale & admitted that the number of sales agreed per branch on average was just 8! That means that at the end of the month there are 30 unhappy clients and 290 unsatisfied buyers. No wonder the ‘profession’ has such a bad image. Oh, and 80% of the homes sold for lest than the original guide price!

In my view London and the top end was due a correction. With 15% pa inflation the average home in the capital was appreciating at the rate of over £50k a year. Most owners were better off sitting in their property rather than going out to work! However, the impact of Osborne’s increases to Stamp Duty Land Tax and the introduction of the extra 3% payable by second home owners has kneed the top end of the market in the basement with transaction down 50% in some places and prices now even falling in prime Kensington & Chelsea!

I started warning about the shortage of property for sale back in 2014. Since then the cost of buying and selling has risen, huge changes have been introduced for those wanting to invest in residential property with higher taxes on both domestic and international buyers. Despite winning a majority last year the Conservatives decided to continue their war on Buy-to-Let landlords and to ignore the plight of anyone who couldn’t afford to buy a home keeping the controversial Help to Buy and Right to Buy policies in place despite the widespread calls to stop pouring fuel on the house price fire. The new Chancellor and the new Housing Minister seem less convinced of the merits of these policies – good for both a stable market and for anyone with a social conscience.

Where next for prices then? Prudence Ivey in the Ham & High reported that even the North London market might be vulnerable and that here prices might slide. The Land Registry published it’s July house price index (not the first post-Brexit survey of the market as some suggested since the completions registered in July will have been agreed in April and May and would have exchanged prior to 23rd June) but we will get a better picture in November on whether the decision to leave the EU will be the final nail in the housing markets coffin.

My own experience has been that there is still a market it’s just different from the one we had before the 23rd June. There’s no doubt that some central London agents are sitting on their window ledges. As before many agents didn’t lay down any fat in the good times and are now feeling the pinch. Some selling agents continue to pump out ‘business as usual’ stories but even the new build evangelists now accept that there are structural issues to contend with.

What next? Well in today’s Telegraph you can see the breadth of opinion. I explain to Anna White that I expect prices in London to fall and within 12 to 18 months the rest of the country to follow. Trump. A General Election. Divorce from Europe… These are all things that on their own would unsettle the market. We have the prospect of all three – in the next two years.

But with uncertainty comes opportunity. For years people sat in their homes congratulating themselves on the increase in value that they felt they were responsible for generating as they lived though an unprecedented period of house price inflation. Owning property literally became a license to print money and many felt that any fool could do it. I’ve met many who prove this to be true. Today it’s much harder. First people are sitting tight, afraid to move. Next some will move and will mis-judge the market.

Some will sell cheap and many will pay too much. Now is the time that an expert can make as much as 20% difference. If you hire one of the best (not the cheapest!) selling agents then they can get you 10% more than the average. Hire a decent buying agent and they can get as much as 10% off the asking price. Two weeks after the Referendum I helped a client to buy a home in Notting Hill for 9% less than he was offered the same property on 23rd June!

Most buyers need an asking price to know what to bid. Many selling agents know that a high ‘valuation’ and a low fee will get more business. In reality the best sales start with a realistic guide price that drives interest and often a premium price. Likewise an over-ambitious price leaves a seller wounded and vulnerable to an well-advised buyer who without competition may pick up a bargain. With so much contrary news and opinion around I don’t think I’ve ever seen a better time to buy. Not that prices are on the floor but there are so many genuine reasons to justify an aggressive if cheeky offer. 2016 is turning into a buyers market.