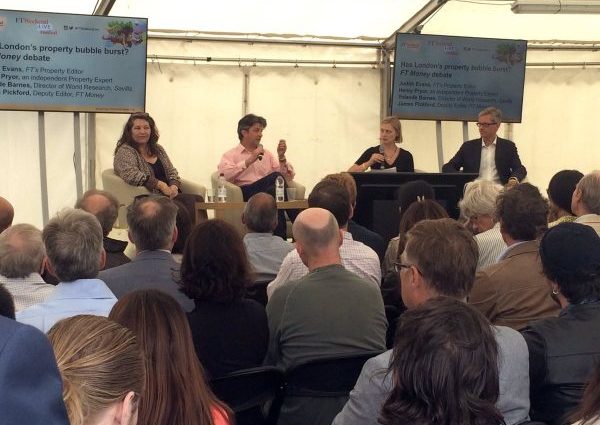 Has the London Property bubble burst?

James Pickford has summarised last weekends FTWeekendLive debate in todays paper with a good look at the state of the London property market. 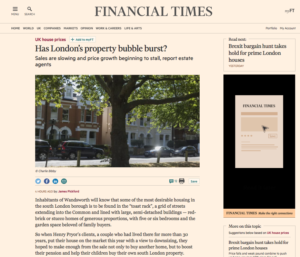 Last Saturday at Kenwood House in North London 20,000 Weekend FT readers gathered to hear some of their favourite reporters and contributors discussing everything from the price of potatoes (on the Food & drink stand) to the shape of the London housing market. I was in the shadow of Yolanda Barnes, the pioneer of property statistics with whom I worked at Savills, Judith Evans the FT property editor and James Pickford who is deputy editor of FT Money. We had a great time despite the heavens opening at the end although I’ll do anything to keep an audience!

I’ve contributed some of my thoughts in this weeks FT Money Podcast which Claer Barrett hosted. You can listen to it and download it here.

The audience at Kenwood was split between property investors who wanted to know if they were likely to continue to make money from housing and those who wanted to know what might happen to the value of their home and whether their kids could ever expect to afford the prices their generation now demanded. It was a lively and hugely enjoyable hour.

James’s article is peppered with great data and some insightful observations like this from Richard Donnell, another ex-Savills alumi who is now the face of Hometrack. He reminds us  that “There are a lot of people in London — including investors and second home buyers — who just don’t need to buy.”

My old chums at Lonres have crunched the data and found transactions in the capital between £2m-£7m have slumped by 47 per cent in the three months to June compared with the same period last year, while even homes below £1m saw a 37 per cent fall in sales. Prices they say have also fallen from the 2014 peak, with buyers in prime central areas now paying an average of 10 per cent less for homes of £2m or above and 6 per cent less for those below. 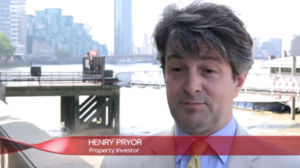 Earlier in the week I contributed to an Inside Out London Brexit special. There was lots of talk of how overseas buyers were now piling into the London market but as I explained to James Pickford “The top end of the London market was fundamentally compromised by government interference in transaction costs for those spending over £1m. Brexit compounds that; it’s not responsible for it.”

Credit still remains a key driver of prices as I have observed before. Adrian Anderson, director at one of my preferred mortgage broker Anderson Harris told the FT that “While the rates are cheap it’s still not that easy for banks to get money out of the door”. Clearly continued rate cuts will support prices but as the proportion of cash buyers breaks above 40% will this in itself be enough?

We haven’t really started on the Brexit negotiations and we have so much else to factor in to house prices that predicting their future direction is extremely difficult. As Yolanda and Merryn Somerset Webb who spoke so eloquently before us at FTWeekendLive said time and again, global banking holds to key to what will happen. Will asset prices be further inflated or could we see an unexpected correction as the world economy struggles to move forward? As Adrian Anderson observes “There is still a market, but the urgency has gone out of it,”