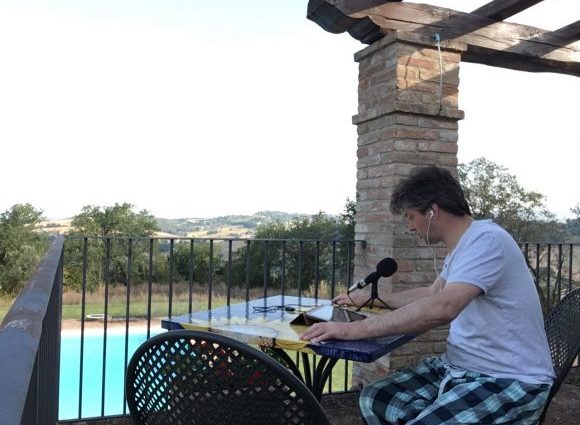 My holiday in Italy this year was not exactly what I had booked. We now make our annual pilgrimage to Umbria staying for as long as we can in an area we now know well and that is starting to know us. We’re very fortunate. This year was not a complete break with invitations as in previous years to do live interviews with the Today Program and BBC 5 Live but there were two new developments which other small business owners keen to keep in touch may find helpful to know about.

The first is that we were in Umbria on the 24th June. 10km east of us at 0330 a 6.2 earthquake woke us and caused significant damage to homes and injured many. Sadly we now know nearly 300 died that night. Being that close meant that a number of radio stations wanted first hand accounts which I could give using the LuciLive App on my iPad, a mic, a neat adapter and Apples early earbuds (the ones minus the mic on the wires). Connected to 4G or to local wifi this connected me via ‘Traffic’ at New Broadcasting House to network and regional news. Had I had a laptop running Chrome then I might have preferred IPDTL but I had an iPad and iPhone. It all worked and worked well. What was more challenging given Luci’s reputation for dropping out mid-interview was the 2 hour booking that BBC’s ‘General News Service’ or GNS made for the following week. Many producers and a lot of reporters have experienced the App dropping out just as they go on air and understandably some producers simply won’t do interviews using these kinds of VOiP tools. I sought advice (or commiserations!) from the MoJo guru who is Nick Garnett who said encouraging things but I’m sure thought I was bonkers. Still, the morning came and I was connected (via the much more forgiving Luci Studio at NBH) to GNS.

As Betty Redondo at GNS said “we connect with reporters in war zones via LuciLive so I think it will work for you Henry”. She was right and as I Tweeted my relief afterwards it was great to have proved that the App, the basic kit I’d brought with me did what was required.

2016-09-16
Previous Post: Has the London Property bubble burst?
Next Post: Market update – Sept 2016
Corona Clinic - Free 30 minute chat via Skype/FaceTime/Zoom or phone for anyone thinking of buying or selling, letting or renting during the Pandemic. See 'services' for more details or send an email to book a time. 😷