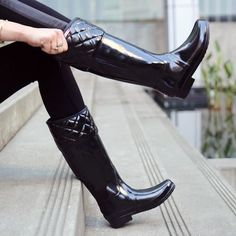 Brexit may be the best time to pull on your buying boots.

If, like me you believe that you make money when you buy and not when you sell then I can’t recall a better time to have pulled on your buying boots. In my 32 year career in property there have never been more excuses to drive down the price than there are now. If you wanted to haggle and needed reasons to do it then look around, this is a Perfect Storm! 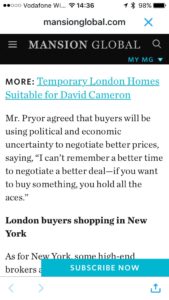 It wasn’t an exact quote in many of the weekend papers but as Andrea Leadsom found to her cost the press aren’t always fair when it comes to writing headlines. “Other than declaring war I’m not sure what might be more unsettling” than the prospect of a new Prime Minister, an undignified scrap to be leader of the Opposition, President Trump as leader of the Free World and a General Election. Oh, and the small matter of Brexit meaning Brexit! Any one of these would be enough on their own to unbalance the housing market and we face the prospect of all five in the next six months.

Selling agents may publicly rebuff these ‘alarmist fears’ as being part of ‘Project Fear’ but sellers (many of whom are buyers too) understand that they cannot ignore these national issues if they want to sell. Buyers can’t be accused of dramatising the situation – we are in an unholy mess.

But out of uncertainty comes opportunity. Most of my clients who wanted to buy on 23rd June still want to and still have the money to do so. What they and most other buyers need is some confidence to commit. There are better, smarter dealers than me who will no doubt come out with clever incentives but for me the old fashioned ‘price reduction’ works well and a discount often gives me all the courage I need.

How much discount I hear you say. Well 1% obviously isn’t going to do it. 25% would be nice but is perhaps optimistic so I guess 10% might be fairer. If you want my money as the buyer and to move on with your life I think 10% off the price might show you too understood the mad world we now seem to inhabit.

Of course George Osborne warned of 10-18% price falls if we voted to Leave the EU. Maybe he’s a tougher negotiator than me. Perhaps his access to Bank of England data means he’s better informed. Either way as someone who has a £40m+ shopping list my view is that whilst I want something off the price I think that the equivalent of the house price inflation you’ve had over the past year is probably not going to kill anyone and reflects some give and take on both sides.

It may turn out that the fall in prices is much more severe – it may be that in 12 months time prices are down 40% or more. In smarter parts of London they were already down 15% before the Referendum and significant falls have occurred recently elsewhere in Europe. Just ask the Irish!