What next for property?

I waited until the day before the Referendum before making up my mind. It wasn’t an easy decision but on balance I decided that remaining was the slightly less risky option. 49% of Britains agreed but 51% decided that it was better to leave. There will be plenty of time pick over the implications but what does the decision mean for housing?

Both sides warned of the implications for house prices before the Referendum, George Osborne used Bank of England numbers to suggest that they may fall by up to 18%.

Hometrack reacted early to the result on Friday morning suggesting that transactions might fall by 20%. I summarised these in my first Tweet of the morning. 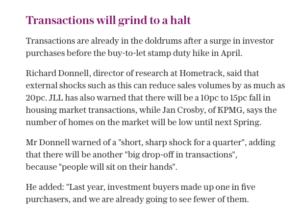 During the day there were many opportunities to comment and I tried to summarise the implications in a radio interview. The bottom line is that we have no idea which means that many deals will freeze until the future is clear. We have some major milestones in the next six months each one of which would be enough usually to unsettle the market;

The Prime Minister has resigned

Jeremy Corbyn faces a vote of no confidence

Donald Trump may get the top US job in November

Talk of a General Election by Christmas

Scotland may get a second referendum

This on top of what might happen to the UK economy as a result of the decision.

Homes will still be required. Estate agents will try hard to maintain confidence and of course we will get through this. The good news may be that the shock result will push those sellers who were refusing to recognise that the market had already changed before the Euro debate. As Anthony Payne at Lonres says “those who don’t really want to sell will clear out. Those who do or indeed have to sell will reset their expectations and buyers may feel confident enough commit”. Confidence is everything.

What the hell happens next? We really don’t know but I suspect that turnover will shrink and prices will fall – by 10% perhaps by Christmas.

Headlines warned of £20k price falls – 10% of the average UK house price but asking prices in London were already falling and the 10% per annum house price inflation was slowing. There will be a correction in prices but there may be a much bigger slow down in transactions.

Here is some of the coverage from Friday 25th June 2015 to which I have contributed;