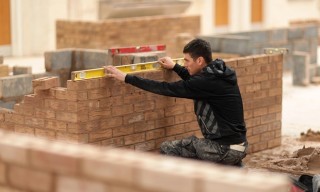 Building more homes may not be the answer.

A recent report in Estates Gazette wondered aloud what the impact of building 2m homes might have given the endless cries to build more homes to solve what we are told is a national housing crisis. In another article in The Economist the author questions the building bandwagon itself and points out that we don’t have the tradesmen or the raw materials to build 200,000 new homes even if we wanted to. It’s also worth remembering that whilst 75% of people think there is a housing crisis nearly half don’t actually think that there is a housing crisis where they live! The now famous Shelter chart (above) shows very clearly who stopped building and when and plugging that gap would be physically, economically and I submit morally possible. I suspect that the case for building more affordable housing – what used to be called Council Housing either by local authorities or Housing Associations is unarguable and as Evan Davis so susinctly put it (below) after the Greens tried to explain it at last years Election, we could build 500,000 if we were minded to.  What seems harder to justify – unless you own shares in a building company or want to be elected to Parliament in 2020 perhaps is the case for building thousands of new private homes.

The Government clearly recognises the size and importance of the NiMBY vote and they have a strong if selfish case – who would willingly want the value of their house reduced or the view from it spoilt by lots of little boxes the present Government sees home ownership rather than home occupation via renting to be one way of gathering votes in 2020. People with a stake in the economy tend to be less reckless in the Polling both I suppose. One way of reducing demand in the South East and of letting a little steam out of prices is to try to shift the centre of gravity north. HS2, the Northern Powerhouse, these and other initiatives are designed to encourage people to think that life in the Black Country or on the edge of the Dales might actually be possible and that rather than buying a two bedroom flat in Zone 2 in the Capital they could get a four bedroom house with a quality of life to match.

Whatever the Tories say Help to Buy is clearly stoking prices but it has done it’s job of getting builders building and lenders lending. Brown-field land owned by Government is being fast tracked to provide space for new homes and the incentives to consider life the north are starting to pile up. HSBC is considering Birmingham for it’s new HQ for example. What’s not yet in place is genuine efforts to provide homes for those who can’t afford the current prices or rents. Since no government wants house prices to fall the only other real option is for the State to get back into building again but there seems little likelihood of this happening.

Will this Government do this? I doubt it. Will Labour espouse it? Perhaps. Will the public get the answer they want or will developers continue to make out like drunken sailors on shore leave? I suspect you can guess the answer to that one.