Where next for the property market?

Back in January 2007 in an article in the Financial Times I rashly asked out loud if perhaps the housing market might have peaked. In a subsequent interview on the BBC Today program I explained what provoked such a question. At the time, the market was in full party mode with buyers, sellers and estate agents all supping from what the then Bank of England Governor described as ‘the punch bowl’. Something that he belatedly decided to take away.

In the winter of 2006 it all seemed just a little too good to be true. Interest rates were stable but not low by today’s standards at 5% although they would rise to 5.75% by the summer. The Land Registry estimated the average price of a house had risen 6.8% through 2006 to £172k. Transaction volumes were cracking along at over 1.5m transactions a year and lenders were cheerily offering 100% mortgages. One lender called Northern Rock was even offering a 110% loan-to-value mortgage!

It has always been my view that house prices are set by the availability of credit. In Q4 of 2006 credit was about as slack as a whores draws! Self-certified mortgages meant that any liar could borrow whatever he needed and since almost everyone got paid when there was a transaction getting deals done was all that mattered.

The only problem was that clearly this couldn’t continue. I had worked through two previous recessions and I knew that at some point the music stopped and someone had to pay the bar bill.

So, what next? Well, the changes brought about by the excitingly named ‘Mortgage Market Review” is already making it harder work to get a mortgage and this is slowing the market and will drag back prices by Christmas. Recent comments by the ‘unreliable boyfriend’ as Mark Carney was described by one MP shows the schizophrenic side of the current Govenor of the Bank of England. First he suggests that the Market may be surprised how soon interest rates might be raised and then he says that whilst their keeping an eye on the housing market in Threadneddle Street rates will probably only be at 2.5% by 2017. So that’s all clear then!

I think rates will rise but I don’t think that this will tame the market much. The coalition government are clearly determined to ramp prices ahead of the General Election next Spring. Controversial Help to Buy equity loan scheme has been extended until at least 2020. This initiative gives confidence to those in the housing market rather than an actual lift to prices but it will keep the market moving.

Clearly everyone who can get their hands on the levers of power in Westminster will claim they have tamed the excesses of boom and bust but I think that’s naive and the high prices we have seen paid in the Capital of late will be the last significant rises for the next few year. Outside the gated community of the M25 I expect life to be much tougher for estate agents and their clients. The market has already found it’s equilibrium and that for most is still 10% below the peaks reached in 2007. I expect turnover to continue to tick over but prices will struggle to advance from where they are today. The good news is that whilst still defying gravity I don’t expect house prices to crash to earth.

New rules on what you can do with your pension is the main reason for my tempered optimism. People are going to put their pension pot in property rather than buying an over-sold annuity. This is going to impact far more directly than Help to Buy or any other Government initiative and was almost certainly maintain prices and trading volumes. Whether it fuels prices is still unclear to me.

So, this summer the latest Land Registry report confirms prices are once again up 6.7% over the past year and that an average home in England & Wales (if there is such a thing) is worth £172k as it was at the end of 2006. Will we see a repeat of 2007? It feels scarily familiar but on balance I don’t think so.

I wrote this article for the Investment Times July 26th published by Hargreaves Lansdown. Download a copy from the App Store here. 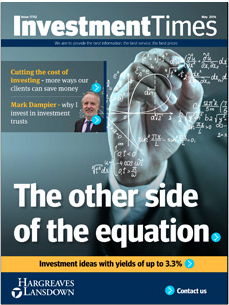