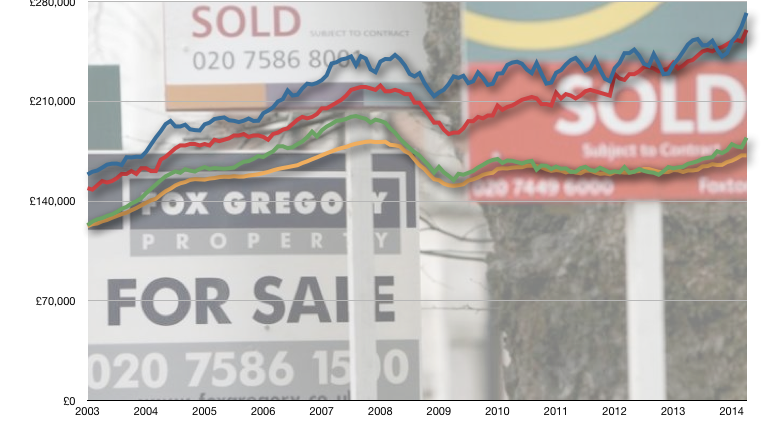 The coalition Government won’t want to see a sharp drop in prices anytime ahead of the General Election next Spring. Bear in mind that of our 24m homes, one third are owned outright, one third are owned with the help of a mortgage and the remaining third are rented. This last group is split roughly down the middle between social housing and private rental. Politicians know that provided home owners feel wealthy they may ignore the fact that the economy is surviving to some extent on the artificial stimulant of quantitative easing.

In terms of political action, two of the three main political parties have pledged to bring in a mansion tax, capital gains tax will apply to overseas investors from April next year and in recent weeks the Bank of England has woken up to the fact that house price inflation may be a problem in some parts of the country as many predict the average rise for the whole of the UK will be close to 10% this year.

Following the Mortgage Market Review I expect lenders to remain much more cautious about the loans they make – especially when it comes to riskier ‘interest only’ mortgages. This may blow some of the froth off prices. However the main driver of property prices will not be politicians, it will be Mr Market. Some estate agents tell me that property isn’t over-valued – they maintain that there has just been “a re-rating” and  that today’s high prices are the new norm. But even these die-hard optimists are not suggesting that prices will continue to rise as fast as they have recently, especially in London. Tighter lending criteria mean that sales are already taking longer to process, a fact that has yet to show up  in the lagging property market indices.

Meanwhile rents seem to have plateaued in many places which suggests that we are close to the peak of ‘affordability’. With little sign of meaningful wage inflation tenants may now be spending as much as they can afford on rent. The resultant low rental yields may not be acceptable to buyers for much longer. Many investors will soon realise that buying for capital gains is pure speculation. London in particular offers new-build properties that aren’t investments at all in yield terms – they are straight bets on continuing price rises.

The most obvious example is the huge urban regeneration project involving 39,000 new flats being built in the so-called ‘Embassy quarter’ just south of the river Thames. I predict that many of these will be left empty. Projects like this are a knee-jerk response to our much trumpeted longterm housing supply problem and could easily trigger a price adjustment. In London in particular any drop could be rapid and fairly steep.

This article first appeared in July edition of ‘Confidant’, the in-house magazine of Messrs Killik & Cº.

2014-07-16
Previous Post: A good start to 2014…
Next Post: Where next for the property market?
Corona Clinic - Free 30 minute chat via Skype/FaceTime/Zoom or phone for anyone thinking of buying or selling, letting or renting during the Pandemic. See 'services' for more details or send an email to book a time. 😷