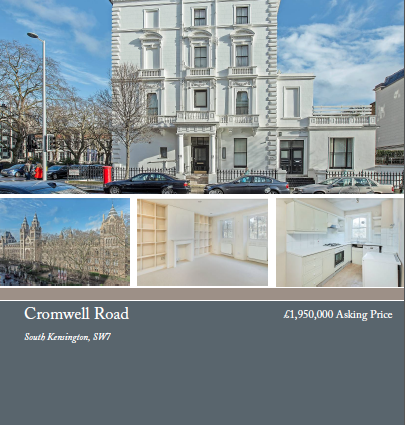 I’m a big fan of Chesterton Humberts, they had a difficult marriage when they got together a decade or more ago but the current CEO is a top man and their troops do a first class job in presenting some of the nicest homes for sale across the country. However…

Details of a little 2 bed flat dropped into my inbox from their Chelsea office that’s ripe for development – subject to planning consent coming through. It’s a 4th floor walk-up, on the Cromwell Road but it’s neat and tidy and could be made into something fun with a bit of effort. The guide price is an eye-watering £1.95m. But my nose twitched, I felt I’d seen this before. With 6m homes in the Capital one often feels one has seen something before but it turns out to have been next door or two floors below. Luckily there’s the internet. A quick trawl and hey presto! This same flat sold in October 2011 for £250,000. Ok, the market has moved on and there is now some planning potential but it turns out it was also for sale last year. And it sold – in October – six months ago – for £895,000! Now competition for business in Sw7 is tough and of course it may be that at £1000 psf it wasn’t especially expensive last year but there is now way in hell that this average flat, still only with planning potential as it had last year is now worth 117% more!

Buyers take note, you could have found the 2011 sale details on NetHousePrices or even on Zoopla where it is now being advertised (along with one of their ‘estimates’  that it’s worth £365,000 but only a buying agent (like me!) would have had the memory of it being for sale last year and the access to check what it was sold for.

2014-01-22
Previous Post: State of the market -Jan 2014
Next Post: There are 40% more homes for sale than you think.
Corona Clinic - Free 30 minute chat via Skype/FaceTime/Zoom or phone for anyone thinking of buying or selling, letting or renting during the Pandemic. See 'services' for more details or send an email to book a time. 😷