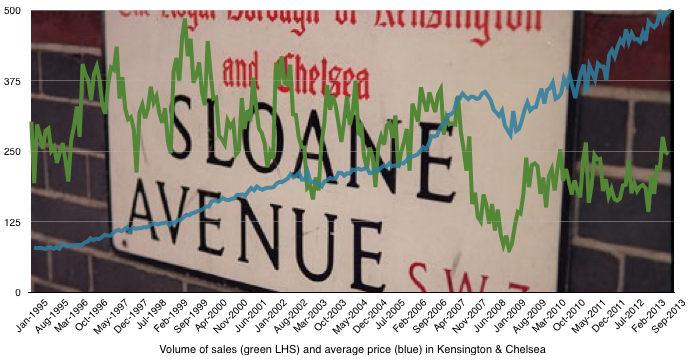 With the publication of Decembers sold volumes by HMRC we can now calculate the number of homes sold in 2013. We started the year with around 700,000 homes on the market and over the year a further 1.4m were added. At the end of the twelve months 1m had sold. Using some numbers published by Land Registry I’ve been looking at sale volumes across London and across England and Wales and in particular at sale volumes and average prices. It’s interesting to see that in two of London’s posher boroughs Wandsworth and Kensington & Chelsea the number of homes sold ebbs and flows while the average price has leapt! You can now understand why there seems to be more agent offices in springing up – the same office now needs to sell far fewer homes to make the same (or more!) profit.

Spare a thought for agents in the North East who have seen values rise since 1995 but are currently seeing around half the volume of transactions that they are used to. Tough times for some!

Here are some graphs which I hope summarise what I mean;