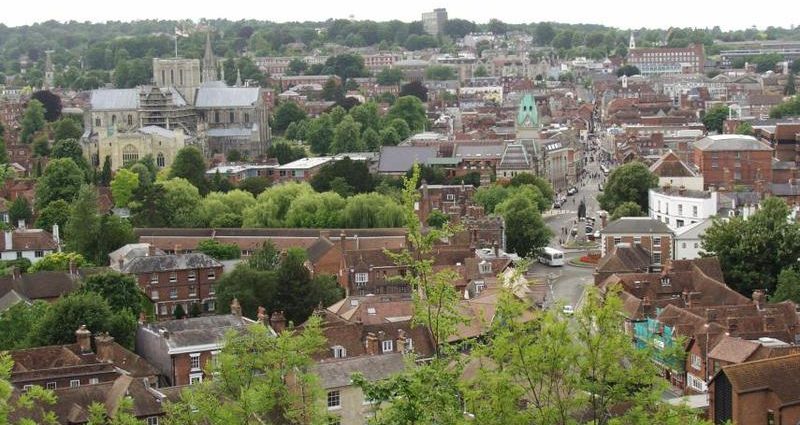 The most unaffordable place in Britain.

Winchester is the least affordable place in the UK to live, whereas Belfast & Hull are the most affordable, according to new analysis by slick job and property search engine Adzuna.co.uk. The research shows that 91% of homes in Belfast are within financial reach for first-time buyers on average local incomes. Reading, Guildford and London are the least affordable rental markets with as few as 25% of properties within budget.

Adzuna calculates the affordability of areas by looking at average salaries for the top 50 cities in the UK using their comprehensive search index of over 500,000 job ads. This data is compared to property asking prices and typical mortgage multiples across the UK to produce an “Affordability Index” for house hunters.

The study reveals that first-time buyers should head to Northern locations like Hull, Sunderland and Salford where average property prices at £159,286 are only 2.5 times the average local couples’ earnings. Bargain hunters should also set their sights on West Midlands cities like Birmingham and Coventry. Further South, Portsmouth is the most affordable Southern city with over 64% of For-Sale properties within budget for local salaries.

While luxury homes can fetch up to £50 million in the nation’s capital, Londoners’ high incomes mean it is only the 10th least affordable city to buy in Britain. London properties, however, have become less and less affordable in the last 12 months with the average home now valued at over 7 times average earnings. On the rental market, only 33% of properties are affordable for Londoners earning a typical wage this month.

Winchester, Chichester and Guildford are the most unaffordable towns and cities in the UK. a typical home in the Winchester area now sells for 8 times earnings at £439,547.  A couple earning an average wage in Winchester can afford over 50% of properties in Southampton (24 miles) and 67% of properties in Portsmouth (30 miles), compared to just 11% in their home town.  Bristol and Milton Keynes have suffered the most drastic change in affordability over the last 6 months, with 14% fewer properties within reach compared to Q4 of 2012.

Northern & Scottish cities continue to be more affordable than Southern ones, cementing a clear North/South divide. Over 73% of properties are in reach in North West and Scottish cities, compared to less than 42% in the South.  The South East and West of England remain the least affordable regions overall due, in part, to an increase in overseas buyers and the growing catchment area for London commuters.  Stagnant housing markets in Eastern cities like Chelmsford (+14%) and Luton (+12%), however, mean property affordability for first-time buyers has significantly improved in the last 3 months.

By comparing the markets for rentals and sales, Adzuna can also reveal that Stoke on Trent, Dudley and Middlesbrough are the UK’s rental hotspots with up to 30% more properties affordable ‘to rent’ than ‘to buy’ in these areas.  The property market in Hull, on the other hand, is almost identical for renting and buying with 98% of homes affordable to working couples.

Top 10 Most Affordable Cities for Homebuyers

* % of properties (un)able to purchase is based on an assumed joint mortgage multiple of 2.75X and 25% deposit.

*** % of properties able to rent is based on an assumption that the average couple can afford to spend up to 30% of their net income on rent.