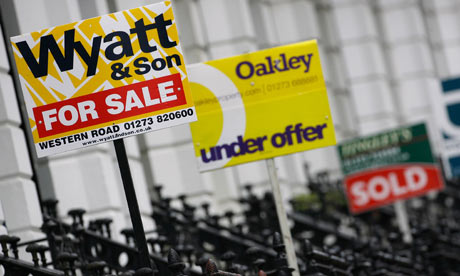 Most homes for sale across the country are 30% over-priced

Question. Is your house worth (a) what you ask for it or (b) what someone will pay for it?
I only ask because however simple this might seem there are over 700,000 people who have their home for sale at present and most seem to think the answer is (a).

Last week I was on the DayBreak sofa discussing the travails of the housing market and we had a package about a couple in Rugby who had had their property up for sale for the past two years. Imagine what moral at their estate agents must be like. Two years of presumably not listening to the advice that at least four agents must have given. Three have been sacked and the forth is still trying to find someone for this much loved home that started at £339k and 24 months later was still not attracting interest even at £290k.

The vendors had bought the 5 bed 4 bath home brand new at what would have been the peak of the market. They have wanted to sell for the past five years and have had their life on hold waiting for a rich and presumably naive buyer who is clearly not going to appear. These guys say that they can’t afford to take a £50k hit but like so many others trying to sell at present they can’t seem to grasp that if they want to sell the value of their home is not based on what they ask for it, it’s based on what someone is willing to pay.

In a survey done earlier this year, Zoopla the property portal suggested that 34% of all homes on the market had had their asking price reduced at least once. Rightmove, the biggest property web site publish a monthly index based on asking prices. Despite actual sale prices staying pretty flat average asking prices in July were 2.3% up on the previous year. (You can see how asking prices and sale prices have faired in my regular Month in Numbers updates).

Even in steamy London, data collectors Lonres.com calculate that 64% of all deal done in the first half of the year were agreed below the asking price. Typically less than half of all homes offered for sale actually sell. Currently I calculate that you have a 9% chance of selling in the next month and about a 40% chance of selling if you leave your property on the market for the next year!

Whilst there are lots of people who would like to by a house the majority won’t. 8M+ people search the big property web sites each month but in June only 73,000 actually bought. The headline grabbing mortgage deals aren’t actually available to most mortals and without the ability to borrow most buyers are simply dreamers. Data out from Rightmove confirms the stand-off between buyers & sellers.

Of course it is up to the seller if they are prepared to accept what might seem to be a low offer but the housing market is not for the squeamish. In the good times you can make a fortune just by holding the deeds to a property. However, when buyers dominate they dictate terms. Many sellers forget that once they have found a buyer they too become the hunter and it is their turn to seek a deal. If you have to take a £50k ‘hit’ on your house the chances are that the person you buy from will find they have to do the same. If they won’t then you have two choices – don’t move or walk away and find someone else who will.

Some people can’t take this kind of hit. Those coming off of the top of the housing ladder, looking to downsize perhaps for whom the difference between what they sell for and what they pay is crucial. Then there are those 1m+ who bought at the top of the market, perhaps six years ago with just a 10% deposit. These people have seen their equity wiped out as prices in many places are 10% lower. Not only do they no longer have the 10% deposit that they needed last time they bought they don’t have the 25% deposit many lenders now require. These people are prisoners in their own homes. Unable to sell, unable to buy another home.

Whilst some pocket remain unaffected, much of the UK housing stock currently for sale is up to 30% over priced. An IMF report published at the end of July warned of “an extended housing market slump”, in which property prices might fall by 10-15 per cent relative to incomes. If prices were to fall back by this amount we’d expect to see transaction numbers pick up but we would also see around 2m people (those who have bought in the past five years) loose most if not all of the equity in their properties. This wouldn’t necessarily hurt the wider market but would leave them struggling when it came to their turn to sell.

The moral of this story is that if you want to sell then the market will tell you how much you home is worth. There’s no point trying to argue that it’s wrong because you will just end up looking ridiculous. Remember that for most people all that really matters is the gab between what you sell for and what you have to spend. If you are forced to take less then so will the person you buy from. If you don’t accept this then you simply won’t move.

The current problems facing home owners in the UK may hang around for the next three years. I suspect that we are three years into a seven year cycle and that the hangover from the last property party is going to take some time to sleep off!