No spring in the housing market step. 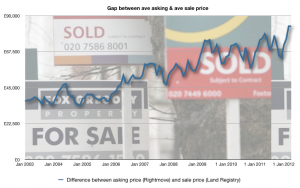 Easter traditionally marks the start of the main selling season but the damp weather that has hung over many parts of the country in the past month seems to have depressed buyers.

The rush of first time buyers who worked to beat the end of the Stamp Duty holiday on 23rd March doesn’t seem to have continued with many recognising that falling prices in most parts of the country quickly wipe out the 1% saving they had hoped to make. Many more home owners have found themselves trapped and unable to move as the modest equity required when they bought five or six years ago has been eaten away as prices have fallen. Someone who put down say a 15% deposit to buy a home in Nottingham for example in April 2006 has seen the value of that property fall by 18%. They now have no equity left and so no deposit to put down for the next property.”.

Despite efforts by the Government to kick-start house building across the country there remains one significant barrier to new buyers being able to pay the prices many sellers are asking. Lenders simply won’t offer the kind of terms that most borrowers would need. One bright spot keeping estate agents happy remains the very top end of the residential market. Sales of homes over £2m through 2011 were up 86% on 2009 according to the Land Registry.

Around a third of all homes on the market have had to reduce their asking price in an attempt to woo buyers. The credibility gap between typical asking prices and resultant sale prices means that many buyers are being mercenary when it comes to making offers. Most have learned that an asking price is not necessarily a guide to current value and are often treating them derision. Selling has never been tougher