The effect of foreign buyers

Each new house price survey is published to cries of “it’s skewed by the London effect” and commentators will point to the capital and it’s influence on ‘average’ house prices. Rightmove records prices in London are now at £435,000, twice the average across England & Wales of £226,000 and a world away from the £141,000 found in the North. Acadametrics (I know, who?) say that average sale prices in England & Wales are not far off these average asking prices at £220,000. They say prices have fallen 0.7% over the last year but due to the method they use their numbers are some way off the average sale prices reported by the Halifax and the Land Registry – both of whom think average sale prices are around £160,000

Those who are keeping the faith in property revel in the stuborn refusal of prices to succome to gravity and to fall to affordable levels. The number of homes actually selling has shrunk to a trickle “but values have held up” they say. The only problem is that if you remove London and some of the South East they haven’t.

London benefits from being the Capital city. It is a magnet for investors across the globe and remains for the time being at least the financial hub of Europe. Those wanting to live in the here can and do pay a lot of money for the privildge. Prices have held up well and are now above their peaks reached in late 2007 just as Credit was being Crunched! Forign buyers, banker bonuses and a lack of choice has ensured that those few homes that have sold in Prime Central London command high prices. The following graph shows how sale prices recorded by HM Land Registry confirms this. Prices and volumes are holding their own. 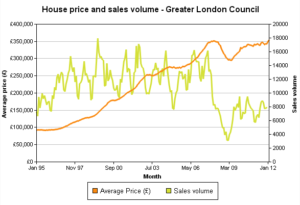 Can we now look at a city immune to the gravitational pull of London. Whilst it has much to commend it, I am not often asked by Italians or Russians looking for an English property “show me the best in Manchester”. There aren’t many yuppy ‘Hedggies’ or Bankers with ill-gotten bonuses to blow who want a slice of Salford. Now take a look at what has happened to prices and sale volumes in what some would view as England’s 2nd City. I should warn you, it’s not a pretty sight! 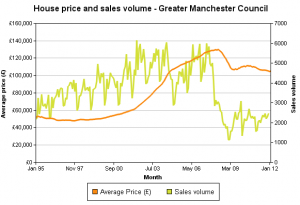 Sales of London property equate to around 6% of the monthly transactions by volume but of course their value (and the changes in these values) represent considerably more. Regular readers of my market summeries will be aware that I cite Hartlepool and it’s fall in house prices of 30% since January 2008 all to often but I think that unless your world stops at South Mimms then it’s worth pointing out that that volumes of sales have tumbled by a half since the peak in 2007/8 and more importantly prices in most places outside the M25 have not recovered. This graph shows London and Manchester. Bluntly Manchester house prices have not been propped up by overseas investors who look at London as a safe haven rather than other parts of the UK. 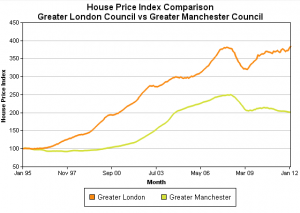