With the results for November published by HM Land Registry last Friday and having kept records of sales, asking prices, sold prices and other data all year we can now begin to assess just how 2011 was for the housing market.
Asking prices start to fall.

Asking prices took a dramatic fall in the last two months of the year falling 5% in the last two months – a good thing since vendors and their agents had stubbornly refused to acknowledge that sale prices had been trending significantly lower for some time. The attached graph shows the gap between average asking prices as reported by Rightmove.co.uk and average selling prices published by the Halifax. Whilst not exactly the same data sets the trends tell the important story – that those selling are still asking just about the same that they were when the market peaked in 2008 yet those actually selling are taking roughly 12% less than they did in that same year.

Sale volumes back to long term norm.
Volumes remained thin with half the number of homes sold in September in England & Wales than in August 2007. 61,031 was admittedly a 17% rise on the previous year but over the the UK only 850,000 properties sold during the whole year – a slight fall on 2010. In 2006 and 2007 more than 1.6m were sold each year.
London is alright Jack.
London has avoided the pain being experienced in many other areas of the country. Prices in Hartlepool are 19.8% lower than they were 12 months ago. International buyers have helped maintain prices and volumes in the Capital although the proportion of £1m homes sold in London has fallen from 67% of all £1m+ sales in England & Wales in January two years ago to just 36% in September – the long term average as it happens. In fact sale volumes are back to their long term averages across the country which suggests that the market should survive the current apparent drought. One exception is the number of £1m+ sales which at 7,779 was slightly more in 2011 than the previous best year back in 2007.
Stamp Duty take falls by £9billion.
In August 2007 over £22.7b worth of homes were sold generating more than £4.5b in Stamp Duty Land Tax for the Government. In September just £9.8b was sold producing a much more modest £196m of tax revenue. 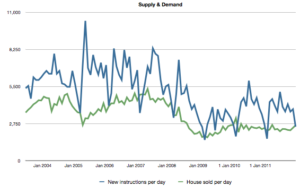 No particular shortage of homes for sale.
The number of homes typically on the market during 2011 remained at around 879,000 much as it was the previous year although the number was maintained by slightly slower numbers of new homes coming onto the market and fewer homes selling. Average asking prices as I have said tumbled eventually but still ended the year up 1% on the year before whilst the Halifax and land Registry recorded average sale prices in 2011 2% lower.
Chances of selling rising but remains less than 50%.
By checking the rate at which properties are selling, monitoring the number coming onto the market and those being withdrawn it is possible to see what percentage actually sell. With around 850,000 homes on the market selling at the rate of 70,000 a month I calculate that in December 2006 you had a 14% chance of selling in the first month of marketing your home. Across 2011 it had fallen to just 7% but things have improved slightly towards the end of the year. Today you have a 9% chance of your home selling in month one but still only about a 50:50 chance if you leave it on the market for a year.
2012 will produce more losers than winners in the real life game of Monopoly.
Predictions for prices in the coming year vary from ‘no change’ to my own admittedly bearish -10%. Importantly, the market remains hugely varied with some doing much better than others. It is important to remember though that as with any competitive market for the to be winners there must be losers. Like the residents of much of Northern Ireland (down 8% over 2011 and half what they were in 2007) as well as Hartlepool (-19.8% in just one year) there will be those who will suffer massive devaluation but elsewhere there will be others who actually make money in property.
Here’s the summary of 2011 against previous years. Figures taken from Rightmove.co.uk, HMRC, HM Land Registry and Halifax. These are the numbers, you draw your own conclusions.