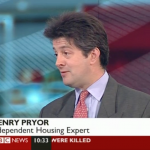 What a week! On Monday Rightmove published their monthly index of asking prices – it fell 3.1%! This leave average asking prices across the UK up 1.2% over the past year and only 4% below the peak of the market reached in April 2008.

On Tuesday HMRC published the number of homes sold in October. At 73,000 (seasonally adjusted) this is roughly the same number sold in September but below the 144,000 sold in October 2007. Lack of turnover is probably more worrying than falling prices since property (and the money released from property) has been a major driver of the High Street. In addition, many different trades depend upon people moving. Not just estate agents but solicitors, removal companies, builders, decorators, printers of change of address cards….

Also in Tuesday the Homes & Communities Agency (who?) published the number of new social housing ‘starts’. Between October last year and March this 35,735 new social homes started to come out of the ground. In the last six months to September just 454 were started! No wonder John Humphrys was keen to tackle housing minister Grant Shapps on the the subject on the Today program! It was a sparky affair!

Finally, the big news of the week was the publications of the Governments long-awaited Housing Strategy. There was much that was welcome and clearly the coalition sees the importance of housing and the imperative of finding a solution. I expect that we will learn more in the Autumn Statement on Tuesday about investment to be made by pension funds in the Private Rented Sector which could provide a massive injection of funds but amongst other announcements there was further effort to simplify the planning process (not necessarily the same as making it easier to get planning consent) so making a start on the millions of new homes that are needed.

One announcement that was not so positive was a plan to provide Mortgage Indemnity Guarentees – providing support in the event that a borrower defaults and the lender is facing a loss. In return for only having to find 5% deposits, lenders get an insurance policy in the event that borrowers default and house prices fall. Good new that builders and banks are to pick up the initial 3.3% of any loss but the tax-payer is on the hook for the next 5.5%. It is hard to calculate the exposure but 100,000 homes at an average price of £120,000 could leave the Treasury with a bill of half a billion pounds if prices fell and borrowers defaulted.

I tried to summarise all this on BBC News this morning in the ‘Your Money’ spot.