Is the party over in London? 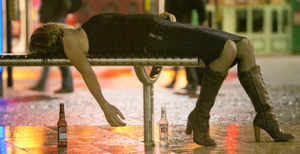 Imagine a party with Oliver Reed, George Best and Peter O’Toole. It’s half past eleven and Best is still warming up in the Phene Arms yet you sense that the evening is only just getting going. By 3.00am the neighbours will be complaining and at 7.00am the next morning there will be one almighty hangover. Cleaning up the mess will not be done by our hell-raiser guests who will be fast asleep with an aspiring actress. Welcome to the last remaining property party – Prime Central London, where the music is loud, the drinks are flowing and where everyone looks beautiful through the bottom of a glass. A party where even the gatecrashers from out of town are welcomed like long lost friends.

Inside the gated community of the M25 the London housing market has kept going long after guests at parties in the rest of the country have gone home. The Land Registry reported that sale prices last month in the North East had fallen 7% over the past year. On Monday Rightmove (the index of how much fun you are having at the property party) reported asking prices in Kensington & Chelsea had jumped 6.6% in the last month!

To be fair, home owners across the country are still in party mood with average asking prices only 1% below their peak in April 2008. Sale prices however are 12% below the peak in January that same year. Like guests at any party, homeowners don’t seem to know when they’ve had enough. Some are starting to feel the effects (sale prices in Hartlepool are down 15.7% over the year) but no one has a hangover like the Irish many of whom have seen the value of their properties fall by more than 30%.

Back at our London party the mood is much more upbeat. The Prime Central London property party shows little sign of stopping. One Hyde Park and more recently the Bulgari residences (also in Knightsbridge) provide evidence that the champagne bar is still very much open. Prices of more than £6,000 per square foot (that’s six grand just for your waste paper basket) have been achieved more than once with purchasers for these properties as for other trophy homes being snapped up by gatecrashing overseas buyers. Between them over the past 18 months they have spent more than £6b in net inward investment though property purchases, something that many at the party and not just agents and developers are understandably keen should keep going.

Asking asking prices in London and the South East are now double what they are in the north with the average price of a home in London now £450,000. If you work in London and want to live in a home worth closer to the national average of £160,000 then according to Rightmove you need to look north of Birmingham or in Wales! Sales of homes below £1m have held up in the Capital but it is the deals done above that price that have kept London estate agents in business these past three years.

But at the London property party it’s late, it’s time for the last dance. Nobody likes the man who comes in and turns the music down but talk by politicians of a mansion tax aimed at wealthy foreigners are scaring the guests. Transaction volumes across the country have fallen leaving ‘zombie agencies’ in many towns doing next to no business. Now the deals are drying up in London too. Fewer homes are on the market with new supply down 13.7% (says The Digital Property Group) on last year and individual sales are starting to become harder to keep on track too. In the ViP section of the London property party sales of £1m homes peaked at over 8% of all London deals in April but this plunged back to the more typical 3.5% in May and remained at 4% in June. The bubble looks to have been pricked.

Finally, as one or two guests try to get a last drink the proverbial fat lady is attempting karaoke. She is singing about yields, the only scientific guide to value when it comes to house prices. Determining the yield from the rent one might expect to get for the purchase price you are invited to pay enables City types to compare property as an investment class along with other commodities like stocks and shares, fine art or indeed wine. Because the transaction costs are high (e.g. stamp duty over 5% for homes over £1m), the fact that property is ‘illiquid’ (taking 92 days on average to sell) and that there are costs associated with keeping a property let at a decent rent has historically commanded a yield of 6%+ for most savvy investors. In central London today buyers seem content with 4% gross returns. They justify this by arguing that they are expecting capital growth but this is a spurious argument usually advanced by selling agents and developers. Who would be content with nil dividend from a share in return for the hope of a rising price?

Last orders are being called in the frothy Central London property market. Rents seem to be pressing up against a ceiling and both sales and lettings transactions are drying up. It’s been one hell of a party, there will be some happy memories to complement the hang overs but there are only so many rich overseas buyers prepared to buy London property at any price and more and more buyers are taking a moment to reflect before they join the party. Whilst it’s flattering to be the life and soul it’s not a great feeling knowing you paid for the drinks and will be clearing up later.